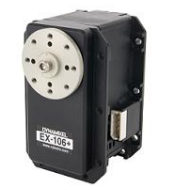 WARNING : EX-106+ has been discontinued.

NOTE : Stall torque is the maximum instantaneous and static torque. Stable motions are possible with robots designed for loads with 1/5 or less of the stall torque.

DANGER
(May cause serious injury or death)

CAUTION
(May cause injury or damage to product)

ATTENTION
(May cause injury or damage to product)

The Control Table is divided into 2 Areas. Data in the RAM Area is reset to initial values when the power is reset(Volatile). On the other hand, data in the EEPROM Area is maintained even when the device is powered off(Non-Volatile).

The Size of data varies from 1 ~ 2 bytes depend on their usage. Please check the size of data when updating the data with an Instruction Packet. For data larger than 2 bytes will be saved according to Little Endian.

The Control Table has two different access properties. ‘RW’ property stands for read and write access permission while ‘R’ stands for read only access permission. Data with the read only property cannot be changed by the WRITE Instruction. Read only property(‘R’) is generally used for measuring and monitoring purpose, and read write property(‘RW’) is used for controlling device.

NOTE : If the value of Bit 0(Normal/Reverse Mode) of the Drive Mode(10) is set to 1, rotational direction is inverted.
Thus, Goal Position, Present Position will have a inverted direction.
This feature can be very useful when configuring symmetrical joint.

Dual Mode is intended to combine two DYNAMIXEL into a single joint to enhance the performance.
In order to use Dual Mode, Slave DYNAMIXEL should be connected to Master DYNAMIXEL with the Sync Cable.

CAUTION : If Master and Slave are not physically connected by frame, both DYNAMIXEL may not perfectly synchronized due to the load applied on each DYNAMIXEL.
Please use appropriate frame to connect DYNAMIXEL in Dual Mode.

It is the operation range of voltage.

For example, if the value is 80, the voltage is 8V. If Present Voltage(42) is out of the range, Voltage Range Error Bit (Bit0) of Status Packet is returned as ‘1’ and Alarm is triggered as set in the addresses 17 and 18.

It decides how to return Status Packet. There are three ways like the below table.

When Instruction Packet is Broadcast ID, Status Packet is not returned regardless of Status Return Level.

The DYNAMIXEL can protect itself by detecting dangerous situations that could occur during the operation. Each Bit is inclusively processed with the ‘OR’ logic, therefore, multiple options can be generated. For instance, when ‘0x05’ (binary : 00000101) is defined in Shutdown(18), DYNAMIXEL can detect both Input Voltage Error(binary : 00000001) and Overheating Error(binary : 00000100). If those errors are detected, the Alarm LED will start blinking and the motor’s output will be 0 [%].

The followings are detectable situations.

NOTE : If Shutdown occurs, LED will flicker every second.

It exists in each direction of CW/CCW and means the error between goal position and present position. The range of the value is 0~255, and the unit is the same as Goal Position.(Address 30,31) The greater the value, the more difference occurs.

It exists in each direction of CW/CCW and sets the level of Torque near the goal position. Compliance Slope is set in 7 steps, the higher the value, the more flexibility is obtained. Data representative value is actually used value. That is, even if the value is set to 25, 16 is used internally as the representative value.

Compliance is to set the control flexibility of the motor. The following diagram shows the relationship between output torque and position of the motor. 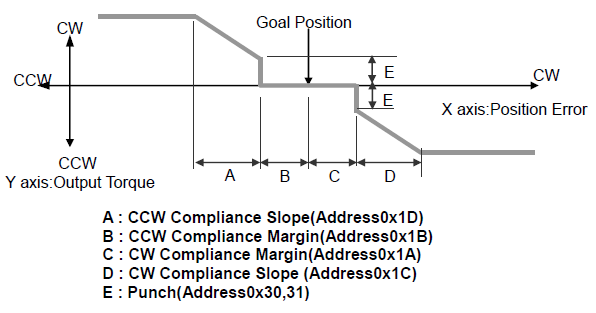 Set the DYNAMIXEL’s goal position through the Goal Position(30). 0 to 1023 (0x3FF) is available. The unit is 0.29 degree. If Goal Position is out of the range, Angle Limit Error Bit (Bit1) of Status Packet is returned as ‘1’ and Alarm is triggered as set in Alarm LED/Shutdown. 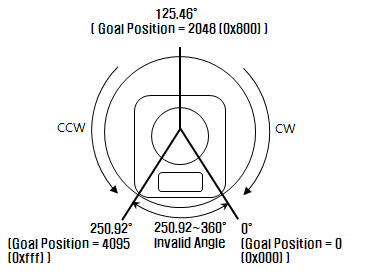 The picture above is the front view of DYNAMIXEL

NOTE : If it is set to Wheel Mode, this value is not used.

It is a moving speed to Goal Position. The range and the unit of the value may vary depending on the operation mode.

NOTE : If the function of Alarm Shutdown is triggered, the motor loses its torque because the value becomes 0. At this moment, if the value is changed to the value other than 0, the motor can be used again.

The picture above is the front view of DYNAMIXEL.

NOTE : Present load is an inferred value based on the internal output value; not a measured value using torque sensor, etc. Therefore, it may be inaccurate for measuring weight or torque. It is recommended to use it for predicting the direction and size of the force being applied to the joint.

It is the size of the current voltage supplied. This value is 10 times larger than the actual voltage. For example, when 10V is supplied, the data value is 100 (0x64)

Current to drive motor is at minimum. Can choose vales from 0x20 to 0x3FF. 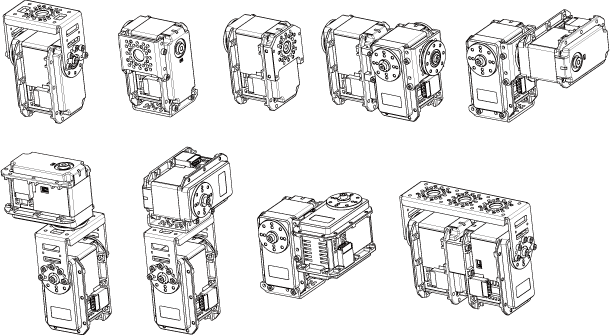 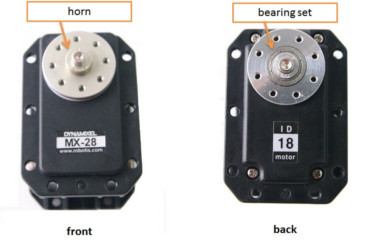 Place the thrust horn washer into the actuator before inserting the horn. You must carefully align the horn to the wheel gear serration by aligning dots. 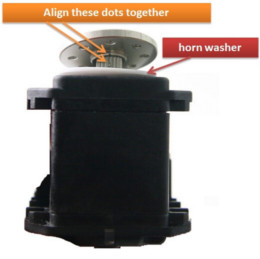 Once alignment is properly done, gently push the center of the horn toward the actuator. Make sure that the horn washer is in place as you tighten the bolt.

You may need to remove the bearing set from the previous actuator and reinstall it into the new actuator. The bearing set can also be purchased separately. As bearing set is rotating freely, therefore alignment is not required when assembling to DYNAMIXEL.

WARNING: To enhance user safety and to prevent proprietary risk or damage, be sure to check the pinout installed on DYNAMIXEL and the board. The Pinout of DYNAMIXEL may differ depending on a manufacturer of connector.

To control the DYNAMIXEL actuators, the main controller needs to convert its UART signals to the half duplex type. The recommended circuit diagram for this is shown below. 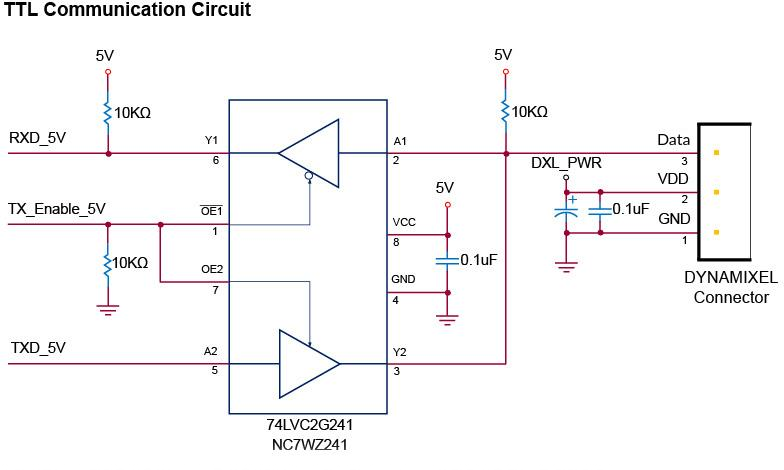 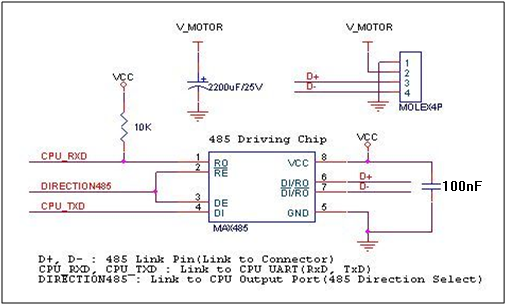 To control the DYNAMIXEL actuators, the main controller needs to convert its UART signals to the half duplex type. The recommended circuit diagram for this is shown below.