To control DYNAMIXEL, communication should be established according to the protocol of DYNAMIXEL. DYNAMIXEL is driven by receiving binary data. Examples of programs for the transmission of this kind of data are described in detail in the User’s Manual of DYNAMIXEL-only controller or the USB2DYNAMIXEL. Thus, this manual describes only the method and protocol of communication used in DYNAMIXEL on the assumption that Main Controller can transfer binary data.

ID is a specific number for distinction of each DYNAMIXEL when several DYNAMIXEL’s are linked to one bus. By giving IDs to Instruction and Status Packets, Main Controller can control only DYNAMIXEL that you want to control

DYNAMIXEL does the Asynchronous Serial Communication with 8 bit, 1 Stop bit, and None Parity.

NOTE: The DYNAMIXEL’s initial ID is 1 at the factory condition.

Half duplex UART is a serial communication protocol where both TxD and RxD cannot be used at the same time. This method is generally used when many devices need to be connected to a single bus. Since more than one device are connected to the same bus, all the other devices need to be in input mode while one device is transmitting. The Main Controller that controllers DYNAMIXEL actuators sets the communication direction to input mode, and only when it is transmitting an Instruction Packet, it changes the direction to output mode.

For Half Duplex UART, the transmission ending timing is important to change the direction to receiving mode. The bit definitions within the register that indicates UART_STATUS are as the following

The TXD_BUFFER_READY_BIT is used when one byte is to be transmitted via the serial communication channel, and an example is shown below.

When changing the direction, the TXD_SHIFT_REGISTER_EMPTY_BIT must be checked. The following is an example program that sends an Instruction Packet

WARNING : Please note the important lines between LINE 8 and LINE 12. Line 8 is necessary since an interrupt here may cause a delay longer than the return delay time and corruption to the front of the status packet may occur.

The delay time between bytes when sending an instruction packet. If the delay time is over 100ms, then DYNAMIXEL actuator recognizes this as a communication problem and waits for the next header (0xff 0xff) of a packet again.

Instruction Packet is the command data sent to the Device.

The field indicates the start of the Packet.

The field indicates the Byte size of the Instruction, Parameter and Checksum field.

The field that defines the type of instruction.

It is used to check if packet is damaged during communication. Checksum is calculated according to the following formula.

Where “~” is the Binary Ones Complement operator. When the calculation result of the parenthesis in the above formula is larger than 255 (0xFF), use only lower bytes.

For example, when you want to use below Instruction Packet,

This field displays the error status occurred during the operation of DYNAMIXEL.

For example, when Status Packet is returned as below

It means that the error of 0x24 occurs from DYNAMIXEL whose ID is 01. Since 0x24 is 00100100 as binary, Bit5 and Bit2 become 1. In order words, Overload and Overheating Errors have occurred.

WARNING : The error types on the table above are related to actuators, and the contents may vary depending on the type of DYNAMIXEL.

It is used to check if packet is damaged during communication. Status Checksum is calculated according to the following formula.

Note that given examples use the following abbreviation to provide clear information.

NOTE: The given examples are made based on RX-64. Be aware that DYNAMIXELs using Protocol 1.0 such as AX-12A, DX series, can be also used with this example in the same way.

This instruction is used to see if a device exists. Regardless of the Status Return Level, the Ping Instruction returns the Status Packet.

This instruction is to read data in the Control Table of DYNAMIXEL.

WARNING : Status Packet will not be returned if Broadcast ID(0xFE) is used.

Instruction that is similar to Write Instruction, but has an improved synchronization characteristic

NOTE : Status Packet will not be returned if Broadcast ID(0xFE) is used.

This instruction is to reset the Control Table of DYNAMIXEL to the factory default values.

WARNING : Status Packet will not be returned if Broadcast ID(0xFE) is used.

This instruction is used for reading values of multiple MX series DYNAMIXEL’s simultaneously by sending a single Instruction Packet. The packet length is shortened compared to sending multiple READ commands, and the idle time between the status packets being returned is also shortened to save communication time. However, this cannot be used to read a single module. If an identical ID is designated multiple times, only the first designated parameter will be processed.

When Bulk Read instruction is received, DYNAMIXEL with ID 2 monitors the status packet being sent from ID 1 of the data bus (the preceeding device ID), and when device ID 1’s status packet transmission is completed, ID 2 sends its own status packet. 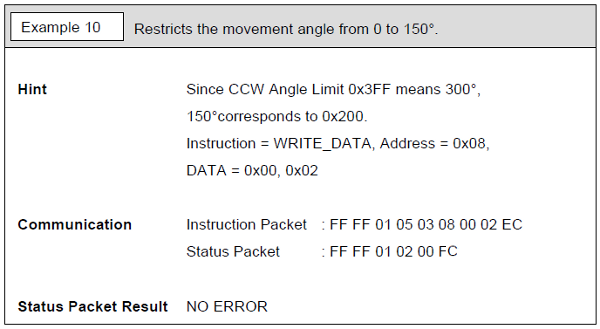 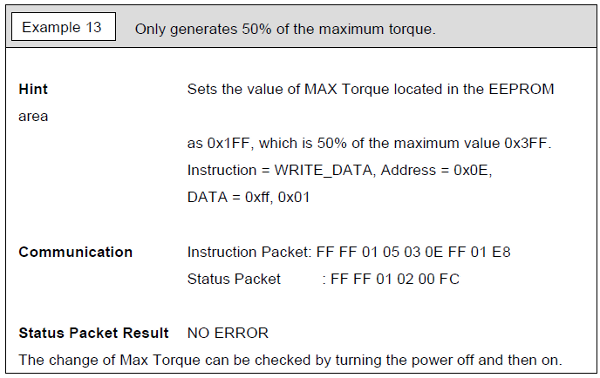 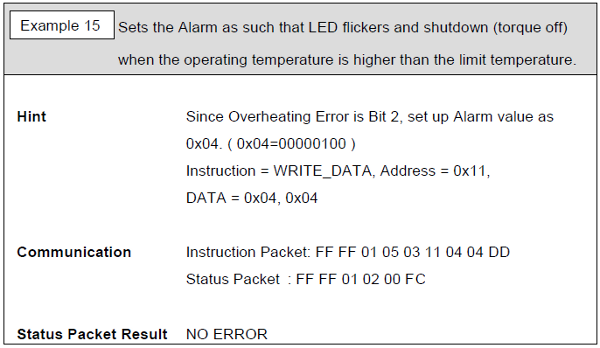 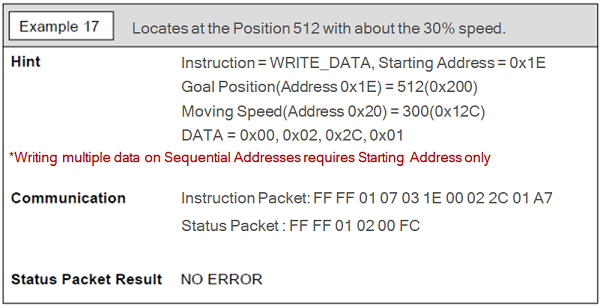 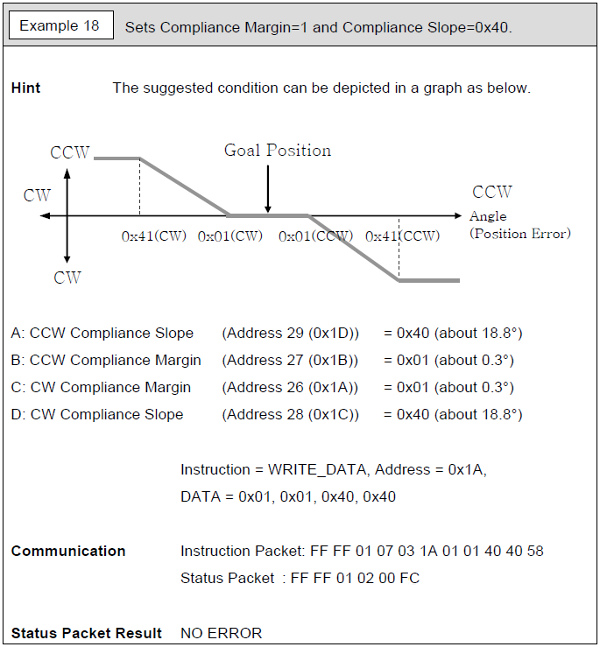 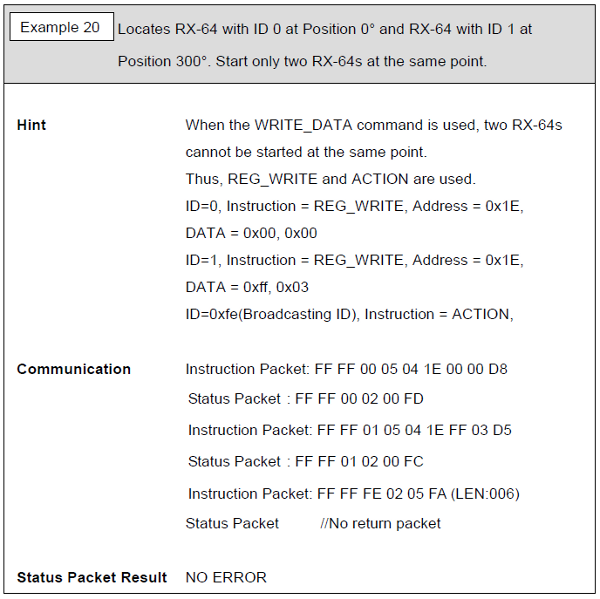 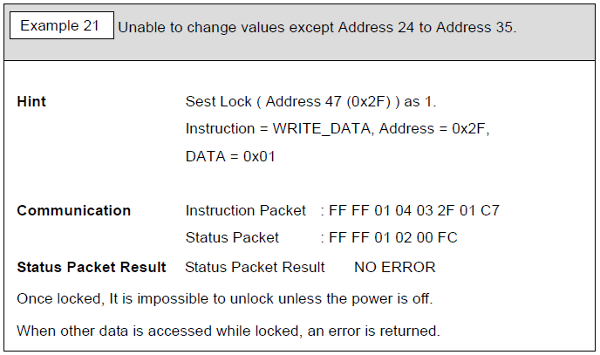