To use the DYNAMIXEL SDK, you need to set up the Controller and DYNAMIXEL.

DYNAMIXEL’s communicate at one of the following signal levels:

The SDK and its examples were written using ROBOTIS USB2DYNAMIXEL signal converter, which is shown below. You can use any other converter as long as it generates TTL or RS485-level signals.

Adjust the signal interface so that you can communicate with your DYNAMIXEL by flipping the switch between the following communication modes:

NOTE : The X-Series’ connector is different than the USB2DYNAMIXEL’s connector. Please check the connector types of X-Series.

The SDK also supports the recently released U2D2. This interface features a small size and automatic conversion of TTL and RS485. We are using the same model connector as the latest DYNAMIXEL-X series, so we recommend this U2D2 to use the latest model DYNAMIXEL. 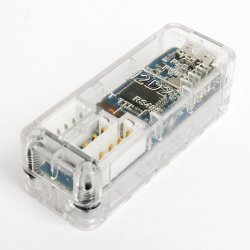 Since the other signal ports, such as UART, I2C, etc., are in various conditions depending on the controller specification, modify SDK yourselves and optimize your codes to your own controllers.

Note that USB2DYNAMIXEL and U2D2 will be able to be used by following settings:

The SDK was tested on a desktop PC and some common SBCs such as Raspberry Pi and ODROID, in the following OS:

and also in MCU:

NOTE : The FTDI driver may not be compatible with some devices.

If you installed ROBOTIS RoboPlus software - a suite of software that allows you to easily interface with all of ROBOTIS’ hardware, including ROBOTIS controllers, DYNAMIXEL’s, sensors, and other hardware components - the FTDI driver will be automatically installed.

If you don’t want to install RoboPlus, install the latest VCP driver from the FTDI Driver Download page.

Recent Linux releases include the kernel which contains the FT232RL driver for the FTDI driver used by USB2DYNAMIXEL. Hence, most users won’t need to install the driver manually.

The SDK and SDK examples were developed based on the MX-28 and H54-200 PRO DYNAMIXEL’s.

SDK examples were tested with the following DYNAMIXEL’s:

NOTE : The BulkRead function doesn’t work with the AX, EX, or RX series

NOTE : The X series’ 4P connector is not compatible with the USB2DYNAMIXEL connector.

To run the SDK examples, the following DYNAMIXEL parameters need to be changed:

To change DYNAMIXEL parameters, use DYNAMIXEL Wizard or RoboPlus Manager. 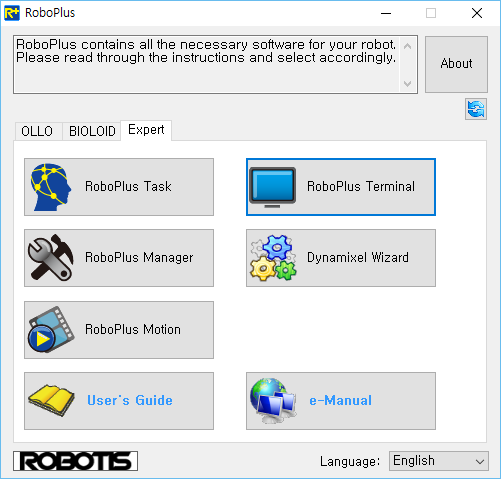 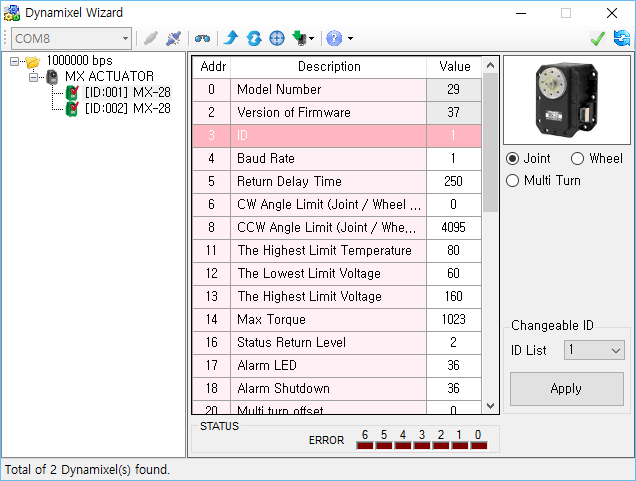